The Warden (not his real name) is an author and publisher who is best known (at least, so far) for his tenure at Emerald Press.


TELL US A BIT ABOUT YOURSELF
I am the Warden!! While it's obviously not my real name (I'd either have very cool parents or grew up in a disturbing household), it's the one in which I ply my trade as a publisher and game designer.


HOW DID YOU GET INTO GAMING?

I grew up in a small town and my friends and I had a tendency to avoid social trends, like drinking and getting girls pregnant. (We saved that for our adult years.) After a trip to a nearby city, one of the guys came home with the Hero Quest board game and we tore into the sucker for months. After a while, we stopped playing it like a board game and started treating it more like a roleplaying game, though we had never played one at that time. Shortly afterwards, a comic book store opened up in town and they had a couple of shelves for RPG material, mainly AD&D and Vampire (which had just been released). By one year's time, we were dipping our fingers into every setting TSR had to offer and gaming on a nightly basis. Weekends were reserved for all-night games.


WHAT IS IT YOU FIND SO APPEALING ABOUT GAMING?
It's the storytelling. There's a passage in the introduction to the original Vampire game discussing ancient societies gathering around campfire telling stories to each other as their entertainment and how roleplaying games are an extension of that. It's the shared storytelling experience, where even the person pulling the strings behind the curtain will never tell how the events will unfold, who will live, and who will die. Mind you, it's taken me years and years and practice, patience, and learning to get to this mindset, but it's why I'm bored with novels and video games most of the time. I want to leap into the fray and tweak it with my own decisions; every other format is too limiting. For me, only roleplaying games gives me the opportunity to truly become part of the story.


SHARE A FAVOURITE GAMING MOMENT WITH US
We have to go back to high school for that one. It was Dark Sun and I can't remember exactly which character I was playing (likely a druid, but it doesn't matter because I never had much luck with characters when I was young), but we were getting our asses handed to us by a lone woman with incredible AC. None of us were doing any damage to her and we were generally afraid for our characters' lives. That's when I had my character toss his weapon down and pulled out the 50' hemp rope, the savior of every PC's backpack.


I told the DM I wanted to run up behind her and tie this damn rope around her neck then throw her off the ledge we were standing on. Basically, hang her from her precious temple. It was the first time any of us had tried anything beyond weapon or spell attacks and the DM wasn't sure it could be done, but we gave it a shot. After going through some initial troubles with non-weapon proficiencies and establishing my PC didn't know how to tie a proper knot, we found a way, picked her up, and her neck snapped as she dropped 40' off the ledge. That was magic and a major eye opening experience I think about often in my work: sometimes the rules are wrong.


WHAT ARE YOU CURRENTLY PLAYING?
I was playing a slew of RPGs for a while, one of the few benefits to recovering from a serious accident. I have a regular Sunday rotation of D&D 4e and Pathfinder, as well as the occasional playtest for another game designer here in town, Fraser Ronald from Sword's Edge Publishing. At the moment, we're getting ready for a Savage Worlds fantasy campaign.


I'm also going to use this question to pimp my game because I've been playing it like a mad dog. A lot of my playing time has been spent on Killshot and we're about ready to wrap up playtesting this month before it's release in August.


CAN YOU TELL US WHAT YOUR FAVOURITE GAMES ARE?
I don't know if I have a favorite game, one I would jump on time and time again. It's the same answer I have for my favorite musician or band: I prefer their individual albums, but there are few I'd follow to Hell and back. For me, it's more about having a favorite group who sees eye-to-eye with you on playing experience and rules and storytelling. In that case, I'd say it's the guys I ran my old Shadoworld campaign with because they were always willing to stretch the material to its furthest levels and trust me to take them places few would be willing to go.


There are two games I have a soft spot for: Earthdawn by FASA (and now published by Redbrick) and the Planescape setting. Those games opened my mind to new possibilities in both setting and game design that while I've rarely played them, they feature prominently on my shelf as a reminder of this genre's potential.


However, I'm a nut for RPG mechanics. D&D 3rd edition fits that bill; it was a magnificent design with so much room for flexibility, it didn't start to crack until we piled the equivalent of a dozen 18-wheelers on a piece of string. And I've just finished reading the new Marvel RPG published by Margaret Weis Productions and that's a fried piece of gold right there.


WHAT WAS THE LAST GAME YOU PLAYED?
Killshot. I did a crossover with two different Teams and brought them together at an isolated house where their client mysteriously asked to meet with them, then I ambushed them with over 20 gang bangers and some other assassins hired to eliminate the players. (They had already killed the client, by the way.) The house used in the scene was inspired by my in-laws' property and two of the players were my fiancee's cousins who lived up there, so they knew the property well. The golden moment was when one of the PCs called up the player on the phone and told him to drive up the road with his truck to block off the escaping assassin. When the scene ended, one player was playing his assassin and himself in the same scene - it was surreal.


WHICH PRODUCTS HAVE YOU HAD YOUR WORK PUBLISHED IN?
The first article I've ever had published was on divine antagonists in Dragon #287 (back when they were sold in print) and it's hanging above my desk. Give me a moment while I look at it fondly. After that, my break came from a PDF publishing company called Emerald Press (you may have heard of it) started up by a Shane Garvey (no relation, right?) to publish my first complete supplement, Campaign Options: Mazes. By the time that one hit virtual shelves, I was running Emerald Press and did so for about 8 years producing D&D supplements. We were even nominated for an ENnie award for Combat Advantage #15 a couple of years ago.


WHAT WAS IT LIKE RUNNING YOUR OWN PUBLISHING COMPANY FOR 8 YEARS?


It was an incredible experience for numerous reasons. When I made the decision to give that up, it wasn't made lightly and much of what I'm working on now is in response to those 8 years. I think everyone who wants to tackle designing their own system should work on developing and publishing material within an existing license first because it teaches you to work within certain confines and forces you to learn how the mechanics of a game works. Like anything else, it's based on hit-and-miss efforts and if you can learn from your misses, you'll get better. This was especially true designing material for D&D - especially 4e - because it was so finely balanced there was hardly any room for error. Sure, you can pop out any wild idea and put it to paper or PDF, but if it breaks the game as soon as a player reads it, then it's pointless. It's a major factor you have to understand when you design your own system. The question right now is whether or not I've learned my lesson and only the players will be able to answer that question. 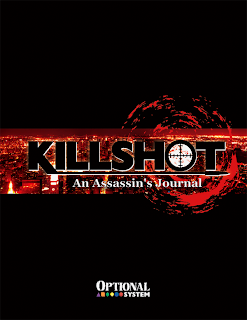 ARE YOU WORKING ON ANY GAMING-RELATED PROJECTS AT THE MOMENT?
You know it. For the past year-and-a-half, I've been working on my own mechanics known as the Optional System and will be releasing my first RPG under it called Killshot. The players are modern day assassins taking on jobs to collect money and experience, but don't let the simplicity of the description fool you. The focus of the game is planning the jobs; players are free to strategize their assassinations however they like and must use their training to study their mark and devise the best assault without getting caught. Think of it as a twisted detective story combined with heavy action.


The main mechanical function of the game are "options," the specific actions you take on your turn. When you successfully perform an option using dice, you gain a bonus option to use immediately for yourself or pass to a Teammate, a concept which works incredibly well in both detection and violence. As I mentioned before, it'll be on sale in August 2012.


DO YOU HAVE ANY WEBPAGES OR SOCIAL NETWORK ACCOUNTS WHERE FANS CAN FIND YOU?
Yeah, there may be a couple. I'm a Twitter junkie, so you'll find a lot more posted there (@Warden_Op) and I have two blogs on the go: I Am The Warden!! (http://iamthewarden.blogspot.com) and Broken Ruler Games (http://brokenrulergames.blogspot.com). I'm also on Facebook and G+, but you'll have to find out what my real name is for those ones and I'm not telling. ;)
Posted by Shane Garvey at 9:00 AM